The Australian Dollar was slow to react to better than expected retail sales coming in at -1.7% m/m for August against expectations of -2.5%. AUD/USD inched up after local data, but it was the continuing rise in commodities and domestic yields that appeared to underpin AUD.

US yields all moved higher as the reality of Fed taper possibilities sink in. Convexity hedging has been blamed for the entire US curve seeing higher yields. The 2-year is at 18-month highs, the 5-year is above 1%, the 10-year is above 1.5% and the 30-year is above 2%. The US Dollar lost ground against all the majors except JPY and CHF.

Dallas Fed President Robert Kaplan and Boston Fed President Eric Rosengren both resigned due to concerns about securities trading. Most commentary indicates that this is not likely to alter any potential adjustment plans to the US$ 120 billion bond buying program.

Energy markets continue to face a plethora of supply chain issues. Brent crude oil went above US$ 80 per barrel for the first time since 2018 and US natural gas traded at 7-year highs. The UK government announced that the army are on stand-by to deliver fuel as panic buying has seen petrol stations run out of gas.

The PBOC added liquidity for the 8th straight day. APAC equities were mixed with Chinese markets up and the rest of the region down to varying degrees.

Federal Reserve Chairman, Jerome Powell and Treasury Secretary Janet Yellen are due to give testimony to Congress today.

The AUD/USD is moving toward the 21-day simple moving average (SMA) and the 55-day SMA. There might be some resistance as it approaches them, but a move above them could suggest some bullish momentum.

Should the 21-day SMA cross higher than the 55-day SMA, this could be bullish. 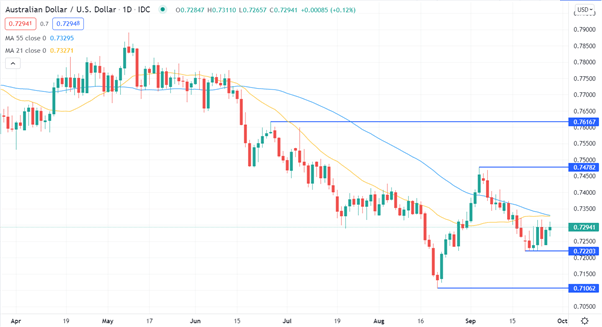 ‘If You Borrow Money to Buy Bitcoin, You’re a Fool’ – Bitcoin News