Chinese GDP to the end of the 3rd quarter came in at 4.9% y/y against expectations of 5.0%. Industrial production printed at 3.1 % y/y missing forecasts of 3.8%. Retail sales data was also released at the same time and was a bit better at 4.4% y/y when 3.5% was anticipated.

The impact of higher energy prices would seem to be impacting the Chinese economy after today’s data was below expectation for GDP and industrial production. Higher input prices for production have seen a slow-down and energy prices do not appear to be abating anytime soon.

The typhoon season has seen torrential rain through-out China, forcing the temporary closure of some coal mines. As the winter season approaches, higher demand for energy is likely to keep prices elevated. This is compounded by various supply issues globally.

The Delta variant also continues to interrupt economic activity in China. Several ports continue to go through episodes of closing and re-opening which has seen the cost of shipping increase significantly.

The Chinese Communist Party continue to implement their ‘shared prosperity’ policy which has weighed on Chinese equity markets as many sectors are forced to re-adjust to a new set of regulations.

PBOC Governor Yi Gang has recently said that contagion from the Evergrande saga can be prevented. Local Chinese media is also reporting that several large developers have requested an easing of the crackdown on the property sector.

There had been calls for the PBOC to loosen monetary policy prior to today’s data and those petitions are likely to get louder.

The Australian Dollar has found some support with higher commodity prices of late, but China is the largest export market for Australia. If the signs of a slow-down in Chinese economic activity continue, an effect on the Australian economy is likely to be felt at some stage.

While iron has steadied in price terms for now, a slower Chinese economy is less likely to need more iron ore. 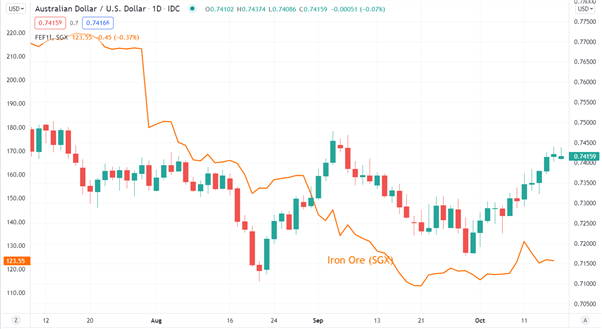