The New Zealand Dollar managed to record a small gain overnight against a US Dollar that was bolstered by the Federal Open Market Committee’s (FOMC) June meeting minutes. While it showed that on net, members remain supportive of easy monetary policy conditions in the near term, rising inflation pressures pushed some towards discussing an exit plan to normalize policy.

The hawkish signals within the FOMC minutes still note considerable uncertainty in the economic outlook. That has likely only grown since the June meeting, with the quickly spreading Delta Covid strain now becoming the dominant variant within the United States according to newly updated estimates from the Centers for Disease Control (C.D.C).

This strain is spreading throughout the world, leaving policy makers across major economies facing the daunting decision of how best to respond at a time when restrictions have just recently been rolled back. New Zealand is likely to continue its hardline approach, with Chris Hipkins, New Zealand’s Covid-19 Response Minister, stating earlier this week that the country will not accept to live with Covid, an approach other countries like the United Kingdom are proposing.

While New Zealand’s stance is likely to result in fewer Covid infections and deaths, it will likely come at the expense of economic growth. That may hurt the New Zealand Dollar in the short to medium term. Specifically, against the US Dollar, NZD may face additional pressure if Covid drives a major bout of risk aversion, and in effect, boosts the safe-haven US Dollar. Still, this morning the island nation saw job ads for June rise by 1% on a month-over-month basis, according to the Bank of New Zealand.

On the equity side for the Asia-Pacific region, we may see a bright start to the Thursday trading session after Wall Street bounced back after breaking a multi-day winning streak. Hong Kong’s Hang Seng Index (HSI) may remain under pressure, however. Chinese regulators have ramped up pressure on technology companies over the past week, with Didi’s listing on the NYSE highlighting the probe’s impact.

The New Zealand Dollar broke above a key trendline formed off the May swing high, although in uninspiring fashion. Still, upside momentum may build in the near term, with the MACD line tracking higher after a break above its signal line. However, a recent bearish crossover between the 20-day Simple Moving Average (SMA) and the 200-day SMA could pressure prices. NZD/USD will need to break above that falling 20-day SMA before moving higher. To the downside, the recently broken trendline could serve as support. 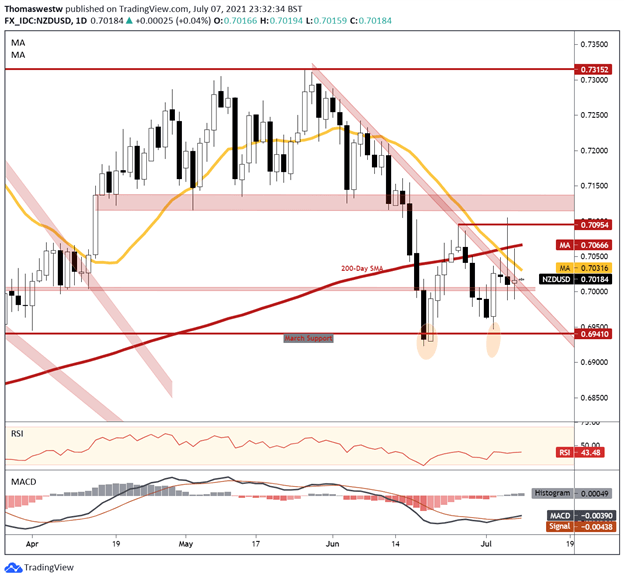 Silver Technical Analysis for the Week of July 05, 2021 by FXEmpire

AUD/USD Hits a Low as US Dollar Dominates. Will the Fed Weigh on…

Omicron Volatility Weighs on AUD Ahead of Trade Data