Sign up to myFT Daily Digest to be the first to know about European Union news.

The towering glass rotunda of the European Parliament in Strasbourg has been mostly silent during the pandemic. But this weekend, it returned to life as a democratic experiment got under way involving people rarely seen in EU institutions: actual voters.

In an EU attempt to reconnect with its citizens and supercharge debate about reforming the bloc after the crises of Brexit and the Covid-19 pandemic, about 200 voters descended on the French city to join an opening panel in the so-called Conference on the Future of Europe.

“I get the feeling that the EU is stuck, they don’t know what to do, and have drafted in citizens to help move things forward,” said Christian Helwig, a retired 65-year-old former engineer from Frankfurt taking part in the exercise. “What drives me is the fear that if the EU does not progress, it will disappear.”

The conference is the brainchild of French president Emmanuel Macron who wants to use it to “breathe new democratic life into our institutions”. The citizens’ panels resemble France’s “grand débat” of 2018 when citizen assemblies were convened to help guide government decision-making (but which ultimately ended inconclusively).

In Strasbourg, participants ranging in age from 16 to 85 and representing a cross-section of EU regions and socio-economic groups, took part in a three-day discussion, carried out in all 24 of the union’s official languages, about the economy, education and social justice.

Future panels will focus on climate change, migration and health policy, some of them conducted in person, others online. Debates will then feed into other discussions featuring MEPs and civil society organisations, with the entire process climaxing during the EU’s French presidency next spring, two months before the country’s presidential elections.

It is an unusual bottom-up experiment by the usually top-heavy EU that has long been dogged by accusations that it suffers from a “democratic deficit”. Voters often complain they can’t make sense of the EU’s legislative process, and turnout at European elections has trended steadily downwards — with the exception of 2019 when it topped 50 per cent, its highest in 25 years.

Whether the citizens being consulted this time around will be able to navigate the conference’s own bureaucracy — which includes a joint presidency, an executive board and a common secretariat — is another matter. 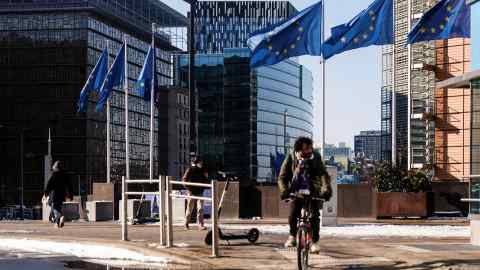 Guy Verhofstadt, former Belgian prime minister and one of the conference’s co-chairs, told the Financial Times that the “real battle” would be to convince governments and EU institutions to translate the outcome of consultations, which are not binding, into concrete action.

Some EU countries also tried to stifle the conference at birth, calling it a distraction when many governments are still fighting the pandemic.

Hungarian premier Viktor Orban threatened to hijack it and use the conference to push for a dismantling of the powers of the European parliament. EU officials have meanwhile been wary of launching a project where MEPs can push federalist causes such as fiscal union or giving Brussels more power over health policy.

Judging by the process so far, after three days of consultation, participants were most interested in prioritising topics such as new EU-wide taxes, common education standards and greater access to sports.

“Perhaps this can become the start of a new balance between participatory and representative democracy,” said Verhofstadt.