Your essential guide to what matters in Europe today. Delivered every weekday.

A 96-year-old woman who was to stand trial in Germany over her role as a secretary in a German concentration camp during the second world war has gone on the run.

A court in the northern German town of Itzehoe on Thursday issued an arrest warrant for the woman, identified only as Irmgard F. A court representative, Friedrich Milhoffer, said the woman had “taken a taxi” from her retirement home in Quickborn, north of Hamburg, and fled “to an unknown destination”.

The woman’s flight “displayed unbelievable contempt for the rule of law and the survivors” of the Holocaust, said Christoph Heubner, deputy executive president of the International Auschwitz Committee.

Prosecutors accuse her of being an accessory to the murder of 11,412 people. The proceedings, due to start on Thursday, were likely to be Germany’s last Nazi trial. Prosecutors are still preparing charges against others accused of involvement in Nazi-era crimes, but most of them are now too old or sick to stand trial.

During the war, Irmgard F. was a typist in the headquarters of Stutthof concentration camp — not far from the then-German city of Danzig, now Gdansk in Poland — from June 1 1943 until April 1 1945. Some 65,000 died in the camp and its satellites, and in the death marches carried out towards the end of the war. Prisoners were hanged, tortured and gassed with Zyklon B. Many of them froze or starved or were worked to death.

Media reports said SS-Sturmbannführer Paul-Werner Hoppe, the camp commander, had dictated execution orders to her, as well as rotas for the concentration camp guards and lists of those to be deported by train to Auschwitz.

More than 50 journalists and spectators, 12 representatives of joint plaintiffs and other participants had gathered to attend the first day of Irmgard F’s trial in an industrial building in Itzehoe — the town’s courthouse had insufficient capacity.

The news magazine Der Spiegel reported that the accused, who was aged 18 to 19 when she worked at Stutthof, wrote to the presiding judge Dominik Gross before the trial saying she did not want to take part in the proceedings because of her age and state of health. She also said she did not understand why she should be held to account now, more than 70 years after the war.

However, as the accused, she is required by German law to be continuously present at her trial. An assessment of her capacity to stand trial found that she would be able to attend for 1-2 hours of proceedings per day.

In her letter to the judge, quoted by Spiegel, Irmgard F. said correspondence regarding the gassing of prisoners “did not go through my hands”. “I neither saw such orders, not did Hoppe dictate such letters to me”. She said staff were aware that prisoners were executed. But the killings “did not happen so often that one might have the impression that people were being executed in the camp on a daily basis”. 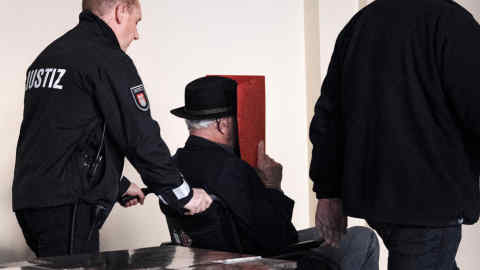 The proceedings against Irmgard F. only became possible after a trailblazing trial in 2011 against John Demjanjuk, a former camp guard, who was convicted of being an accessory to the murder of 28,000 people in the Sobibor extermination camp during the war.

The verdict of the Munich court said anyone who participated in “the machinery of extermination” was complicit and should be held to account.

The judgment led to a number of prosecutions of former guards, as well as of Oskar Gröning, who had worked as an accountant in Auschwitz. In July last year, Bruno Dey, a 94 year old who had served as a guard at Stutthof during the war, was given a two-year conditional sentence after he was convicted of being an accessory to the murder of 5,230 people.