Iranians say ‘I do’ to state-sanctioned online romance

Sign up to myFT Daily Digest to be the first to know about Iran news.

Ali, a devout Shia Muslim, went online to find a woman “not ugly nor beautiful” but religious with a university degree. Sara applied for a man “not short nor tall; not thin nor fat” but with a masters degree and an average income.

Two months after they were introduced to each other, they got married, one of 3,700 couples in Iran to have found lasting love through Tebyan, a state-affiliated website that encourages marriage. In July, amid growing official concern about falling marriage rates, Tebyan launched Hamdam, an app.

“Hamdam is a child of its time,” said Mohammad Bagher Ghalibaf, Speaker of the parliament who attended its launch, a sign of official backing for the site and its philosophy of encouraging traditional marriage via modern means.

Online dating apps, including Tinder and Bumble, are widely available in Iran but Hamdam and Tebyan are free, rely on a volunteer matchmaking service and can be seen as a policy tool for a regime that fears the encroachment of western morals. In its first two months, 170,000 people have signed up via the app.

Official figures show that the number of marriages that take place every year in Iran has fallen by more than a third over the past decade, while the number of divorces has risen by a quarter. Over the same period, the number of live births has declined by a fifth.

Hardline president Ebrahim Raisi acknowledges that economic issues may play a role in a country hit hard by US sanctions. During a June election campaign, he recalled asking “young people once why they didn’t get married? They said ‘With what housing?’ and ‘With which job?’”

This week, Iran’s vice-president for women and family affairs, Ensieh KhazAli, underlined official concern about falling marriage rates. “We have to help young people get married when they are at their most fertile age,” she said.

In reality, many people in the Islamic republic, whose regime swept to power in 1979 promising a return to more traditional values, increasingly desire freedoms they see elsewhere. Authorities often have little choice but to turn a blind eye to people’s private relationships, choosing not to intervene in “white marriages”, where unmarried people live together.

“Children no longer see life through their parents’ eyes and question principles like marrying one person for life,” said Alieh Shekarbeigi, a sociologist. While most Iranian families still favour traditional values such as early marriage, so-called modern families, focused on education and independence, “have doubled in number and are on a sharp rise”, she said.

“Iranians are now confused about how to identify themselves: with Iranian nationalism? Shiism? Tradition? Or their desire for western lifestyle?” said one sociopolitical analyst. “Who are the role models? Clergy? Or celebrities, each of whom have millions of followers on Instagram?” 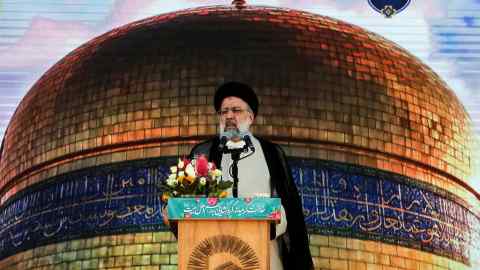 Komeil Khojasteh, director of the Tebyan Institute which is behind the website and app, said the internet can be used to encourage more traditional lifestyles. His aim is for 1m of the country’s unmarried people to sign up to Hamdam.

“Society has become modern which needs a new approach so that it does not threaten our deep-rooted characteristics of identity,” he said. “In the modern world, the family institution has been weakened.”

Those who sign up to Tebyan come from a wide range of backgrounds, said Sara, who did not want her real name to be published. “I saw modern women filling up forms at the website and men who held PhDs,” she said. “There even was one genius who came with bodyguards as he was a designer of fighter jets and helicopters.”

Sara and Ali knew little about each other when they first met in the presence of their parents. “I was told: she is 27 years old, is an urban woman, holds a masters and her parents are teachers. I was not told how she looked,” said Ali.

Sara had requested a man of Persian ethnicity; between 170cm and 182cm tall. She stipulated no ponytails and said a good temper was essential. Ali qualified.

Volunteer social workers at Tebyan monitored their initial meetings, including working successfully as mediators in negotiations over the dowry.

Happily settled in married life, Sara and Ali say they have concerns about their future. “We’d like to have kids but are not confident about our future and the economic situation,” said Sara. But for Ali “despite all challenges, marriage is the best decision”.

Cardano Summit Begins Tomorrow, Here’s What You Should Know

S&P 500 and the Dow Jones finished the week with gains, the Nasdaq down in a rowdy week