Sign up to myFT Daily Digest to be the first to know about AP Moller-Maersk AS news.

Maersk is expecting record profits this year after the world’s largest container shipping group lifted its forecast for the third time as disruptions to global supply chains and a resurgence in consumer demand sent freight rates soaring.

Maersk, which carries about one-fifth of all seaborne freight and is thus seen as a bellwether for global trade, has benefited along with other container shipping groups from extraordinary demand this year following the end of most coronavirus lockdowns.

This would be the highest operating profits in the company’s history, beating the previous record of about $12bn in 2008, just before the global financial crisis caused earnings to tumble the following year.

Chief executive Soren Skou deflected questions about whether he was embarrassed the group was now expecting profits four times the level that was anticipated at the start of the year, saying he was “pleased” that customers were doing so well they wanted so many goods shipped.

“There’s nothing in our data that suggests the current strong demand is about to abate. Demand is driven both by very strong consumer demand for products both in the US and even in Europe, and on top of that we have this inventory rebuilding cycle going on,” Skou told the Financial Times.

Skou conceded that the situation was “clearly getting worse in Los Angeles”, a crucial port on the US west coast for trade with China and the rest of Asia. Congestion outside the port had eased to only about 10 ships last month but stood at 59 ships on Wednesday, with Skou blaming a lack of longshoremen and truckers.

Maersk had expected a “normalisation” of its business in the second half of this year but Skou confirmed that on current outlook there was none in sight, meaning it would be at least 2022 before conditions ease. 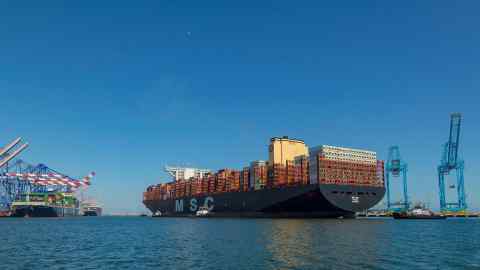 The chief executive said companies worldwide were trying to make their supply chains more robust. “The quickest way to get a more resilient supply chain is to have more inventory. Having inventory beats missed sales, for sure,” he added. He has previously said the pandemic will spell the end for the just-in-time supply chain.

Skou said Maersk was doing everything it could to help customers. While it was only able to add 5 per cent extra capacity during 2021, Maersk had increased its departures on the transpacific trade — the main bottleneck — from seven a week to 12, he added.

Maersk updated other numbers as well, saying it expected free cash flow of at least $14.5bn instead, up from a previous forecast of at least $11.5bn. Underlying earnings before interest, tax, depreciation and amortisation should be $22bn to $23bn, up from $18bn to $19.5bn.

Asked whether there could be a fourth profit upgrade during the fourth quarter, Skou replied: “I really hope this is it because it’s getting a bit crazy.”

GBP/USD tumbles to one-week lows under 1.3800 as the US dollar strengthens

Google earnings aren’t as exposed to Apple change that sunk…