Newsletter: The Road to Recovery

Expert coverage of how business and the economy are recovering, post-pandemic. Delivered 3 times a week.

Protesters from the US to Australia and across Europe have railed against government interference and repressive Covid restrictions. But in Singapore, a sizeable chunk of the population is asking for even greater state control.

A petition is circulating in the city-state to bring back mandatory quarantine for all overseas travellers, despite the Delta variant already circulating widely, while a quarter of Singaporeans are in favour of a return to lockdown restrictions.

Singapore’s government announced with great optimism in June that it would change its “zero-Covid” approach and instead learn to live with the virus.

Its strategy was held up as a model for other countries looking for a safe way out of the pandemic. But as cases inevitably rose in August and September, panic set in.

Authorities responded this week by rolling back freedoms for residents despite outpacing most advanced economies in fully vaccinating 82 per cent of its population.

With more than 2,000 daily cases, working from home has become the norm again while primary school pupils are back to home-based learning. For the next month, only two diners are allowed at restaurants and households can welcome just two visitors.

The decision underscored how many cities in Asia, most of which avoided the large number of deaths and cases that crippled the US and Europe last year, remain apprehensive about reopening their economies and borders.

Asian financial hubs such as Singapore, Hong Kong and Tokyo have struggled to find the right balance between protecting their citizens and reviving their economies.

The fallout has been illustrated in the latest Global Financial Centres Index from September 24, which showed both Singapore and Hong Kong falling 25 points and Tokyo dropping 30 points. By comparison, New York fell just two points and London three.

Singapore’s fading economic attraction was also reflected this week by the announcement that its population fell by 4.1 per cent to 5.45m, one of the largest year-on-year declines in the country’s history. The decrease was led by a 10.7 per cent drop in its non-resident population, which is largely foreign workers and students.

But tightly controlled Singapore, whose quasi-authoritarian government largely bars any protest, had come the furthest among Asian cities in opening up.

The decision has led to a rare occurrence in the city-state: rising public dissent over the government’s strategy.

“I have never in 20 years seen the academic or medical professional industry so vocal in their disagreement with the government as it is over the treatment of asymptomatic cases,” said Jeremy Lim, of the Saw Swee Hock School of Public Health at the National University of Singapore.

Healthcare professionals have criticised widespread population testing after the government sent test kits to every household, which contributed to nervous residents with little or no symptoms overwhelming hospitals.

“Many feel it doesn’t make sense to screen the asymptomatic,” said Lim. “The resulting high numbers are causing a lot of anxiety and worry. People are flooding hospitals and GP clinics. This affects healthcare manpower as staff are quarantined and wards shut down.”

One doctor who works at a big hospital in the city said he had to reassure a vaccinated Singaporean woman in her 20s who had tested positive for Covid-19.

“People are genuinely frightened of getting sick — many view it as some sort of personal failure,” he said. “This particular patient was asymptomatic but waited for her test result like it was a cancer diagnosis.”

Nearly a quarter of people in Singapore felt the latest restrictions were too lax, while more than half felt they were “just right”, according to market research firm Milieu Insight this week. One quarter felt they were too strict.

“What surprised me is how divided people were. There were a lot of people upset by the measures but an equal amount were supportive of more restrictions,” said Stephen Tracy, managing director of Milieu. “There is a sense, however, that the latest rules are not in line with the strategy the government laid out.”

A petition calling for all returning travellers to quarantine for two weeks in designated hotels or government facilities garnered nearly 3,000 signatures by Thursday. Singapore exempts travellers from China, Hong Kong, Taiwan, Brunei and Germany from quarantining. Passengers arriving from other countries, such as New Zealand and Australia, can isolate at home for seven days. Imported cases are a fraction of overall cases, according to health ministry statistics. 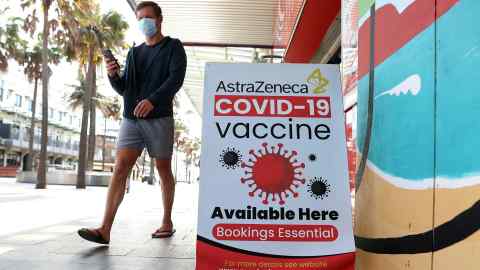 However, some experts argue that Singapore should be applauded for attempting what no other country has managed: a controlled exit from the pandemic.

“There is a lower tolerance for the sheer number of deaths and cases seen in other countries because of the way we avoided that for most of the pandemic,” said Dale Fisher, a senior infectious diseases consultant at Singapore’s National University Hospital who also played a big role in the city’s Covid-19 response.

Governments should “avoid overpromising the removal of restrictions because things can quickly change”, especially with so many unvaccinated in large parts of the world, Fisher added. “We believe this [approach] is safer.”

My two-year, 26-country journey to the frontlines of the climate…

Ford Earnings Beat Estimates. Shares Are Soaring Because the…