We’ll send you a myFT Daily Digest email rounding up the latest Vietnam news every morning.

Vietnam is loosening a strict, nearly three-month lockdown in Ho Chi Minh City after a stark warning from business and a record quarterly drop in gross domestic product.

The easing of constraints on movement, factory work and other activities in Vietnam’s business capital follows a decision by the country’s communist leaders to scrap a “zero-Covid” strategy in favour of a more flexible approach.

From Friday, Ho Chi Minh City’s local government will allow gatherings of up to 10 people, or up to 50 if all have been fully vaccinated or recovered from Covid-19. The city will also introduce a “green card” system giving greater freedom to operate normally for companies whose staff have received two vaccine doses.

As of Monday, nearly 7m residents in the city of more than 10m had received one dose of a Covid vaccine and nearly 3m had received two, according to Vietnam’s health ministry.

The easing comes after companies, including groups representing the foreign investors that drive Vietnam’s economy, warned Prime Minister Pham Chinh that the strict social-distancing measures in and around Ho Chi Minh City were crippling business and prompting some companies to move production abroad.

After enforcing tough quarantine and track and trace measures in 2020, Vietnam contained new local infections and became one of Asia’s few economies to grow.

However, from the middle of this year, it suffered an outbreak of the Delta coronavirus variant focused on Ho Chi Minh City, exposing failings in the government’s procurement and administration of vaccines. 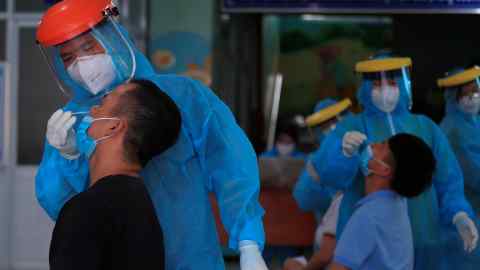 From July 8, authorities imposed a 12-hour curfew and lockdown in the city, which was tightened to restrict nearly all movement, including between the provinces and districts that make up the conurbation.

Companies were in effect forced to choose between shouldering the cost of housing and feeding workers in their factories or suspending production.

The lockdown measures hit hardest in labour-intensive sectors such as clothing and footwear, but electronics producers were hit, too. Companies that suffered problems with their suppliers included Apple, Samsung, Toyota and Nike.

Vietnam on Wednesday reported a 6.2 per cent third-quarter plunge in GDP, the sharpest drop reported since it began keeping records.

Chinh and other government officials have acknowledged in recent days that Vietnam could no longer pursue a zero-Covid strategy and would instead pursue a “new normal” policy of aiming to contain the disease.

At a meeting of the government’s Covid national steering committee this week, the health ministry adopted guidelines for what it called “safe adaptation, flexibility and effective control of the Covid-19 pandemic”.

“Vietnam, like many countries, is recognising that there’s no way that it can exist in a zero-Covid environment, and that is positive,” Mary Tarnowka, executive director of the American Chamber of Commerce in Vietnam, told the Financial Times. “This move toward living safely with the virus is very important.”

Vietnam has reported about 780,000 coronavirus infections and about 19,000 deaths from the disease, nearly all of which have been logged since the beginning of July. Infection rates have slowed in recent weeks after peaking in late August.

The Road to Recovery

Technical analysis for US Crude, XAUUSD, and EURUSD today (21 October 2021)

Will I Qualify for the Maximum Ex-Spousal Social Security?