USD/JPY had been in a narrowing range the past few years, and on that was a chart that had been of interest for some time for the very reason that it hadn’t been of much interest to the broader market. At some point the narrowing volatility (wedge formation) was set to give-way, and as of last quarter we appear to have finally reached a resolution.

USD/JPY is trading above the 2015 and 2017 trend-lines (with the latter making up the top of a cleaner-looking wedge pattern). A breakout above the 2020 and 2019 highs would be a big development, as it would be the first big hurdle (11240) crossed since poking outside of the wedge.This would also have price snapping the series of lower-highs and lows created over the past few years.

A run beyond 11240 could spark a large macro rally that pushes USD/JPY well into the 12000s at some point. If, however, the sneaking out of the wedge turns out to be a false breakout, then more of same choppy routine we’ve seen over the past few years may be in store. The April low at 10747 is considered the invalidation point. 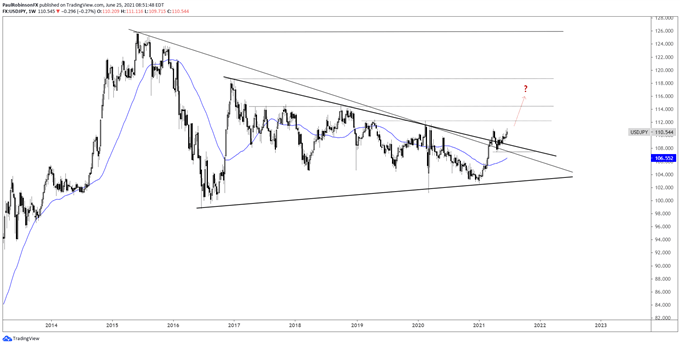 German ZEW Economic Sentiment Index jumps to 51.7 in January, a…