Carlos Brito, who stepped down from Anheuser-Busch InBev this week aged 61, is already planning a long second act. “Brito 2.0” could involve another quarter-century of working, said the Brazilian businessman who spent three decades at the brewer.

Brito built AB InBev from a Latin American regional player into by far the world’s largest brewing company, with brands including Budweiser and Stella Artois.

But his final years were overshadowed by his largest, most contentious deal, the £79bn takeover of rival SABMiller in 2016. AB InBev’s share price is more than 45 per cent below where it was when that deal completed, and it is still saddled with $83bn of debt.

AB InBev’s aggressive dealmaking defined an era of consolidation that cemented the dominance of a handful of global beer makers. Brito leaves the company — and the industry — transformed from when he joined what was then Brahma in 1989.

Trevor Stirling, an analyst at Bernstein, called him “one of the three titans that have shaped the modern brewing industry,” alongside former Heineken chief Jean-François van Boxmeer and the late SABMiller leader, Graham Mackay.

In many respects, Wall Street’s view of Brito’s legacy accords with the former chief executive’s own. “We started from one country in Latin America, one country in Europe, and we built a global brewer . . . one of the top three CPG [consumer packaged goods] companies in the world and the highest by profitability”, he said.

“He has clearly created a lot of value for his shareholders,” Stirling concurred.

Everybody . . . wants companies to manage waste so we minimise the impact on the planet. So, all of a sudden, efficiency became a cool thing

With AB InBev rallying from the worst of the pandemic — it reported far better than expected first-quarter results — Brito has handed the reins to Michel Doukeris, a 25-year company veteran known for building up brands and digital sales.

“He’s very competent; he’s better than me,” said Brito, citing his successor’s achievements in Mexico, Brazil, China and the US.

Doukeris’s career path reflects AB InBev’s evolution into a truly global company, which Brito argued would not have happened without the SABMiller deal. “It was the right thing to do,” he said, for a brewer that thinks “not only about the next few years but the next 50, 100 years”.

But he admitted Covid-19 had set back AB InBev’s debt-cutting plans by about two years, and he preferred to highlight the 2008 hostile takeover of Anheuser-Busch.

That bid came just before the global financial crisis hit. “We needed 10 banks on the closing date to come up with a couple of billion dollars each and some banks were just disappearing every day,” he recalled. But once AB InBev got that financing, “we never looked back”.

The age of brewing megadeals is over, Brito acknowledged, though smaller-scale dealmaking continues. That, analysts said, put more pressure on AB InBev to build brands and grow organically, although its scale has not always helped its agility.

One example is hard seltzer, the flavoured alcoholic fizzy water that has taken the US drinks market by storm. In 2016 AB InBev acquired the pioneering brand, SpikedSeltzer, only to be overtaken by new rivals White Claw and Truly; it still lags behind those brands, despite gaining market share this year, according to Bernstein.

“I think sometimes, maybe, we took longer to embrace some changes,” Brito admitted, because the company’s size made it wary of cannibalising its huge existing profit drivers.

Without acknowledging that the US beer market is in decline, he predicted that non-beer products such as hard seltzer would grow in importance. “What people call the fourth category, which is the blurring of beer, wine and spirits . . . endanger[s] a section of existing categories, legacy categories.” 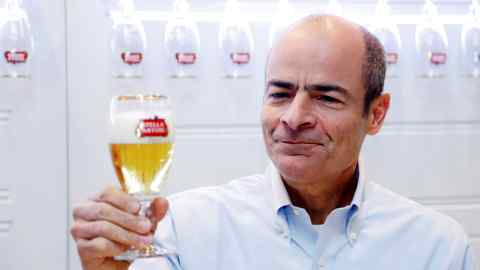 Expectations of chief executives evolved as fast as drinking habits during Brito’s reign but he said AB InBev would not be “an activist company”, campaigning on issues outside its core remit.

“The biggest challenge today [is] that people think CEOs and companies need to have an opinion about everything,” he lamented.

Investors’ new focus on environmental, social and governance, or ESG, concerns might appear an uneasy fit with AB InBev’s embrace of zero-based budgeting. Yet Brito painted the 3G Capital-backed system in which every cost must be justified anew in each budgeting period as making for a greener company.

“Everybody . . . wants companies to manage waste so we minimise the impact on the planet. So, all of a sudden, efficiency became a cool thing,” he said.

Companies now needed to understand that their communities “only allow you to exist if you’re part of the solution”, he said: “The moment you’re portrayed as part of the problem, they’re not going to kill you but they’re going to regulate you, tax you, restrict your business.”

Brito urged governments not to raise taxes on companies such as his to pay for their Covid-19 outlays, but to impose the burden on those that profited in the pandemic.

“When they raise taxes to pay for Covid incentives and stuff, they should go after the companies that need to share their wealth because they have consumers that were pushed towards them,” he said. Some businesses tripled or quadrupled their market value: “We didn’t.”

Brito has not yet settled on his next move, but did not rule out another chief executive role, or working again with his mentor, 3G co-founder Jorge Paulo Lemann, who funded his education and hired him into banking in his 20s.

The calls Brito received after announcing his departure suggested he would have “many options”, he said, and he planned to spend July and August returning them.

But he voiced little doubt this was the right time to relinquish the company he shaped. “We have to pass on the baton to a new generation, otherwise they’ll go elsewhere,” he said. “If the CEO stays forever, the machine doesn’t work.”

Where Will Retail Traders Go Now?