Most US troops now out of Afghanistan after main base closes

The US has left its main military base in Afghanistan, part of an accelerated withdrawal that has led to a resurgent Taliban gaining territory and concerns that the country could descend into chaos.

The Afghan military is set to take over Bagram Airfield, the vast US base that was once the centre of nationwide command and a sprawling symbol of the country’s “forever war”. The closure of the base, announced on Friday, means most US troops have left the country.

About 600 troops will stay behind to protect the US diplomatic mission, changing Washington’s role to providing financial and logistical support to Afghanistan from outside the country.

The Pentagon expects to meet its complete withdrawal date of September 11, two decades after US President George W Bush vowed to defeat the Taliban and al-Qaeda.

Most European countries have already withdrawn their troops, with Germany, Italy and Poland announcing last week that their troops had returned home.

The US military exit comes as security situation has worsened in the country and the Taliban have launched waves of offensives, against Afghanistan forces and civilians.

Peace talks between the Taliban and the Afghan government that began in September have failed to lead to a political settlement or ceasefire.

General Austin S Miller, the US military commander in Afghanistan, warned the country could descend into a worsening civil war in a rare press conference last week.

Eighty out of Afghanistan’s approximately 400 districts have fallen to Taliban control since May, said Mir Haider Afzaly, an MP and chair of the Afghan parliament’s defence commission.

“The violence and the battle has intensified in recent months,” he said. “We need the foreign troop support especially in the field of aviation and intelligence.” 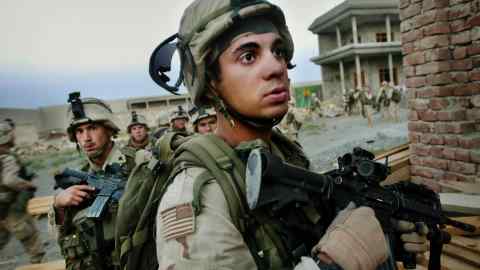 Ghani has requested $3.3bn in security assistance and 3m doses of the Johnson & Johnson coronavirus vaccine. The country has been hit by a surge of infections driven by the Delta variant.

“The biggest practical measure of US support is going to be financial — they pay the entire budget of the armed forces and will continue to do so for the foreseeable future,” said Andrew Watkins, senior analyst at International Crisis Group, a non-profit organisation.

“But their support is also political and psychological; the morale of the Afghan forces depends on feeling like their Air Force, their supply lines, their paychecks are all reliably maintained by that US support.”

The US Central Command has as of the end of June handed over six facilities to the Afghan Ministry of Defence and shipped the equivalent 800 C-17 loads of material out of the country.